Lifestyle Galaxy demands high ethical standards and compliance from itself and from all of its members and independent representatives.

For this reason we have a Compliance Training in place that is mandatory for anyone joining the business opportunity, including a test after having gone through the training. If the test has been passed, then an independent rep knows exactly what can and what cannot be communicated in order to remain compliant.

Furthermore we are working on a Meritocracy System, based on trustworthiness of each rep. The system is based on what we, as a company know of an independent rep, but also on endorsements given by other members.

Imagine a rep has done something unethical, then not only his rating goes down, but also of the rep who endorsed him/her. This is important in order to not to endorse too lightly and really think about it. After all, it may have consequences for your own rating.

We Believe in Doing Good, Trust and Compliance 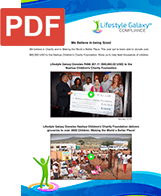 Read More in Our Ethics PDF

Guidelines and restrictions are as follows:

Before watching this video, you confirm that you will not reproduce nor record this video for your personal benefit or to share with others. Compliance will be monitoring the use of this video and it should only be used as listed in the guidelines above. Any violations found or reported to Compliance may impact your Meritocracy Rating and could affect your future exclusive opportunities.